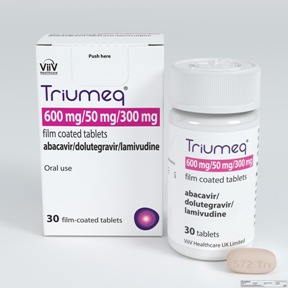 The U.S. Food and Drug Administration (FDA) has approved Triumeq, ViiV Healthcare’s single-tablet, triple-combination antiretroviral (ARV) regimen, as a first-line therapy to treat HIV. The tablet is comprised of the integrase inhibitor Tivicay (dolutegravir) plus Epzicom (abacavir and lamivudine) and is the first single-tablet regimen to receive approval that does not contain Truvada (tenofovir/emtricitabine). Consequently, Triumeq is an option for those who have impaired kidney function.

Before starting on the drug, people with HIV should receive the HLA-B*5701 genetic screen, otherwise known as the abacavir hypersensitivity reaction test, which determines if someone is likely to develop a kind of allergic reaction to the abacavir component.

The FDA approved Triumeq based on the results from various randomized controlled trials in treatment-native people with HIV, including: SINGLE, which tested the drug against Atripla (efavirenz/tenofovir/emtricitabine); SPRING-2, which put Tivicay up against Isentress (raltegravir); and FLAMINGO, in which dolutegravir bested Prezista (ritonavir-boosted darunavir).

Triumeq is not recommended for people with known HIV resistance to abacavir, lamivudine or any of the approved integrase inhibitors.