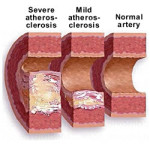 HIV infection is associated with an increased risk of hardening of the arteries, investigators report in the online edition of Clinical Infectious Diseases. The US study compared changes in carotid artery thickness and new plaque formation between HIV-positive and HIV-negative men and women with similar demographic and cardiovascular risk factors.

Overall, HIV infection was not associated with changes in carotid artery thickness. However, people with HIV were more likely to have new plaque formation, even when their viral load was undetectable.

“We demonstrated that HIV-infected women and men had a 61% greater risk of new focal carotid artery plaque formation over seven years compared with uninfected controls,” comment the researchers. “The HIV-associated risk was higher than that associated with smoking. Furthermore, the elevated risk persisted among ART [antiretroviral therapy]-treated individuals with persistent HIV viral suppression, suggesting that sustained suppression of circulating HIV RNA to below detectable limits does not eliminate excess CVD [cardiovascular disease risk] in the treated HIV-infected population.”

More encouragingly, people living with HIV whose CD4 count was above 500 cells/mm3 had a similar risk of new plaque formation to HIV-negative individuals.

Cardiovascular disease is now an important cause of morbidity and mortality in people with HIV. Investigators from the United States wanted to see if HIV was associated with progression of subclinical atherosclerosis – hardening of the arteries – over seven years of follow-up.

Their study population comprised 1011 women (74% HIV positive) enrolled in the Women’s Interagency HIV Study and 811 men (65% HIV positive) in the Multicenter AIDS Cohort Study. All had repeat carotid artery ultrasound investigations – thickness and new plaque formation – between 2003 and 2013. Two-thirds of women with HIV and three-quarters of men with HIV were taking ART.

The prevalence of carotid arterial plaques increased from 8 to 15% in women and 25 to 34% in men during follow-up. Overall, people with HIV were 61% more likely to experience new plaque formation compared to HIV-negative individuals (OR = 1.61; 95% CI, 1.12-2.32). The association between HIV infection and plaque formation was present in both men and women.

Current smoking increased the risk of new plaque accumulation by 42%. Other risk factors were higher total cholesterol and older age.

The investigators identified 199 people with HIV who were taking ART with persistent viral suppression (16% of women with HIV; 29% of men with HIV). These patients had an increased risk of new plaque formation compared to the HIV-negative group (aRR = 1.77; 95% CI, 1.13-2.77).

“Our finding that participants who maintained HIV suppression still had an increased risk of new focal plaque formation suggests that vigilance with respect to the long-term adverse consequences of ART remains warranted for all HIV-infected individuals,” write the authors.

The relationship between immune status and plaque formation was then examined.

Longer duration of therapy with a protease inhibitor was a risk factor for plaque accumulation in men with HIV (aRR = 1.12 per year of cumulative use; 95% CI, 1.01-1.25) but not women with HIV.

“Our data support earlier ART initiation, before CD4 counts decline, which may mitigate HIV-associated increased CVD risks,” conclude the authors. “Better understanding of these processes is necessary, both to prevent or delay CVD development and to improve treatment strategies in the growing and increasingly older HIV-infected population.”