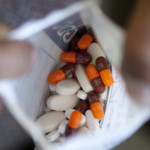 This Article was written by Mara Kardas-Nelson and published on NAMAIDSMap.com

Getting people tested for HIV is one thing; getting them onto antiretrovirals (ARVs) another; and retaining them in care for a long period something else entirely. A session at the 17th International Conference on AIDS and STIs in Africa (ICASA) in Cape Town, South Africa, last month, considered which patients are least likely to be retained in care, and innovative strategies to keep patients in care in the long run, using limited resources.

By retrospectively analysing data from patient files between February 2002 and May 2013 at a clinic in Masaka, Uganda, Juan Gozalez-Perez of the AIDS Healthcare Foundation presented findings showing that patients were more likely to die and least likely to be retained in care in their first year after diagnosis; and that men, adolescents aged 15-29, and those with a CD4 under 100 were least likely to be retained.

The study considered 12,475 patients, with ‘lost to follow-up’ defined as a patient not presenting for care 90 days after the last missed appointment. In the cohort, 2216 patients were lost to follow-up, 971 died, and 1734 were transferred out. Of these, 61.1% were female with a median age of 32.2 years and a median CD4 baseline of 162. Of those lost to follow-up, one-third of patients could not be reached, 11% had died, 24% were transferred out or not documented, 19% were alive and not taking their ARVs, 6% self-referred out, and 4% had their files lost.

The greatest loss to follow-up occurred in the first year of treatment. After one year, retention rates were 82.4%. Thereafter the rate of attrition was relatively consistent, and 63% of patients treated for ten years remained in care. Female patients were more likely to be retained, with 83% of women, versus 81% of men, being retained in their first year, and 63% of women, versus 58% of men, retained at 10 years. People aged 15-19 fared worse, with retention rates of only 43% at five years, compared with 70% in the overall cohort.

While their study did not consider rates of retention of people not yet on ART, Gonzelez-Perez noted that patients in pre-ART care, such as those taking cotrimoxazole, are even harder to retain. “We need to work more on this, it’s a completely different situation.”

A retrospective analysis of routine patient data in Shiselweni district, Swaziland, presented by Kiran Jobanptura of Médecins Sans Frontières (MSF) Swaziland and Switzerland, found that children and adolescents were less likely to re-suppress when considering viral load for patients in the Shiselweni district of the country, indicating that this group of patients may need tailored adherence and genotyping support.

By considering records of patients who had a first detectable viral load attending Ministry of Health facilities in Shiselweni between May 2012 and July 2013, MSF also found that those with a viral load under 1000 copies/ml, with a CD4 under 350, and who did not receive counselling were more likely to re-suppress viral load after an adherence intervention. In total, 54% of patients observed achieved re-suppression. Surprised by results that counselling did not lead to re-suppression, Jobanptura notes that treatment literacy may offer an explanation. “Just receiving detectable results, without counselling, may enable patients to re-suppress,” he said, also noting, “we cannot say that we’re doing the counselling in the optimal way.” Currently the project is using lay counsellors who receive limited training for counseling, as nurses are in short supply.

Stategies for retention in care

Two South African interventions are looking at how to retain long-term ART patients in care in a way that reduces the time they need to go to and wait at clinic – freeing up their own time, the time of healthcare workers, and decongesting overcrowded clinics.

Anna Grimsrud, a doctoral student at the University of Cape Town, presented data on ART adherence clubs in Gugulethu and Khayelitsha, townships just outside of Cape Town, South Africa. In clinics here, MSF South Africa and the Desmond Tutu HIV Foundation support clubs which allow long-term, stable patients – defined as those in regular clinic care on ART for two years, with a suppressed viral load and without another chronic condition, to meet outside of a clinic setting every two months to collect their medication. They are supported by a community healthcare worker who leads group counselling sessions and takes basic clinical measurements such as weight. Participants only have one clinic visit each year unless health issues arise.

The clubs have been going for several years now, and last year patients were given four-months ART supply over the Christmas holidays, with the intention of limiting patient interruptions. Grimsrud notes that many patients travel from Cape Town to homes in the Eastern Cape and other provinces throughout the holidays, and therefore miss their adherence club appointments.

Grimsrud notes that there was no difference in the percentage of patients falling out of care when given two-month versus four-month supply. Because of the positive results, this year all adherence club patients are receiving a four-month supply over the holidays. “We had to start to trust our patients and believe that a 4-month supply was best for them, and that they would return to us after,” she said, further noting, “these findings have led us to ask: what is the optimal visit frequency for stable patients?… The adherence club model is just one model of care. We understand that there’s a whole complex package of what can be done for patients. We need more operational research and data.”

An in-clinic model has been used at the Ithembalabantu People’s Hope Clinic in Durban, South Africa. Here, stable, long-term patients are only seen by a clinician every six months, and pick up their ART every two months in a “fast track wing” at the clinic. Staffed by two healthcare workers who check the patients’ vital signs and hand out drugs, the wing is able to support 1200 patients a month.

Maharaj says the intervention is better for all patients – those in the fast-track wing, and in the regular clinic, and healthcare workers. “If you have a large, congested clinic you weigh down your human resources. This is a form of task-shifting, and also helps us to see more critical clients.” Maharaj also said that reducing waiting times affords patients more opportunities to pursue work and family life. “We want them to be gainfully employed so that they don’t have to rely on aid. When people are working, you achieve the economic benefits of ART. You have an economically productive and sustained population.”