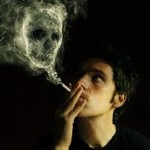 AIDS researchers have found that smoking doubles the risk of death for people who are taking HIV antiretroviral medications (ARV’s). The findings of this research were published in the Journal AIDS where researchers analyzed data on 17,995 HIV positive people from both European and North American Cohorts. Injection drug users were excluded from analysis.

They looked at individuals who started ARV treatment between 1996 and 2008 and had about 79,760 person years of follow-up information. Sixty percent of the individuals were smokers.

Factoring in deaths from all causes, the mortality rate among smokers and non smokers was 7.9 and 4.2 per 1,000 person years respectively.

If these HIV positive men smoked they could expect to loose 7.9 years off their life expectancy

It’s never too late to give up smoking! If you smoke stop today

You can read the entire story on AIDSMap here