A study of pre-exposure prophylaxis (PrEP), the English PROUD study, demonstrated the highest effectiveness yet seen for this method of HIV prevention, was presented at CROI 2015 in Seattle, WA this week

The effectiveness was 86%; for every 20 infections that might have occurred in participants, 17 were stopped by PrEP. There were three HIV infections among 276 participants randomized to immediately start taking daily tenofovir/emtricitabine (Truvada) to prevent HIV infection, and 19 in 269 participants asked to wait a year before starting PrEP.

The high level of effectiveness was unexpected, not least by the researchers. This was not because they thought PrEP would be ineffective, but because they thought only a much larger study would be able to prove it scientifically. The reason PROUD was able to demonstrate effectiveness with what is, by prevention standards, a small study was because HIV incidence – the annual rate of infection – was far higher than that expected, showing that there is a population of gay men at imminent risk of HIV in England that could be cost-effectively protected by PrEP.

PROUD’s position as the most successful scientific trial of PrEP lasted a mere 15 minutes: in the following presentation, exactly the same level of effectiveness was also reported for the French IPERGAY study 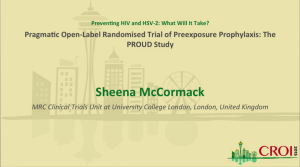