A French and Canadian study of pre-exposure prophylaxis (PrEP) presented todayat the Conference on Retroviruses and Opportunistic Infections (CROI 2015) in Seattle, USA, found that the HIV infection rate in participants taking an intermittent PrEP regime was 86% lower than in people taking an inactive placebo.

Extraordinarily, this is exactly the same level of effectiveness that was demonstrated in the English PROUD study, the outcomes of which were presented 15 minutes before Ipergay –

Ipergay is a very different study from PROUD, in that the dosing of the medication is different. In Ipergay, gay men and other men and transgender women who have sex with men, and were at high risk of HIV infection, were asked to take two Truvada pills (or a placebo) from one day to two hours before they anticipated having sex. If they actually did have sex, then they were to take another pill 24 hours after having sex and a fourth pill 48 hours after it. The period of taking PrEP would thus cover two to three days. If they continued having sex, they were told to continue taking PrEP until 48 hours after their last experience.

it is encouraging that two different ways of taking PrEP have both proved effective in gay men, at least in a western-European context. 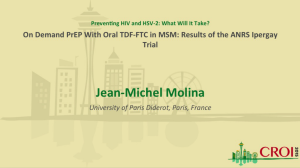