A team of researchers at The Scripps Research Institute in Jupiter Florida has created a novel drug that shows promise against HIV. This new compound (eCD4-lg) is an entry inhibitor, a designer protein that “blocks all known strains of HIV”

The scientists consider this compound so potent and effective that it could form the basis of an alternative to an HIV vaccine, which scientists have been trying to develop (thus far unsuccessfully) for decades.

According to Michael Farzan a professor at Scripps Research Institute who led the effort, this entry inhibitor is the broadest and most potent so far. This protein has shown effectiveness against all strains of HIV tested, raising the possibility of an HIV vaccine alternative.
The study was published in the current issue of Nature : AAV-expressed eCD4-Ig provides durable protection from multiple SHIV challenges
The new drug also protected against doses of the virus higher than those that occur in human transmission for at least 8 months after injection.
eCD4-lg was developed following previous research on the CCR5 co-receptor. When HIV infects a cell, it inserts its own single-stranded RNA into the host cell. This insert of genetic code allows the virus to transform the cell into a “manufacturing site” for HIV.
Scripps researchers had previously investigated a CCR5 co-receptor that could be used to prevent infection by manipulating related proteins. HIV binds to CCR5 receptors before it can penetrate the cell. Using the CCR5 work as a point of departure, the scientists designed a protein that mimics the receptor and simultaneously binds to two sites on the surface of the virus, which prevents it from entering a host cell.
A delivery mechanism for the drug was designed using an engineered adeno-associated virus. This is a small, relatively harmless virus that does not cause disease. The adeno-associated virus turns cells into manufacturing sites that churn out enough of the new protective protein to potentially last for decades.

The data published by the team shows that the new drug candidate binds more strongly to the HIV-1 envelope than the best neutralizing antibodies currently known to work against the virus. Although it will be years before the protein can be tested in humans, it has been successful against SIV in a macaque model. 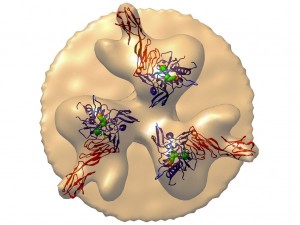 This image which is adapted from the study, is an aerial view of HIV’s surface proteins (blobs) shows how eCD4-lg can bind to the virus & neutralize it