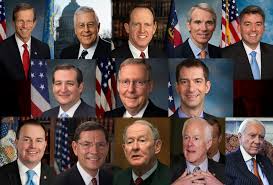 Today the 13 “dirty bakers dozen”, the 13 white Senators who have been colluding in secrecy to create their version of the new American Healthcare Act emerged today with their “discussion draft” of their plan.

Is this democracy at work ….I think not. This group of white men just colluded behind closed doors with all our lives in the balance.

Here are some interesting facts:

How can we call this DEMOCRACY? This is the American Horror Story

Don’t stay silent, we must #Resist. Contact your senators today